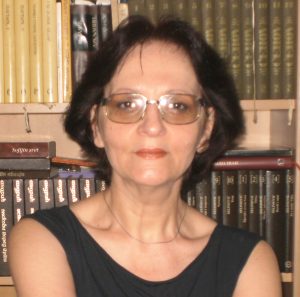 She is the author of

story collections: The Master’s Palace, The Fire in Alexandria

collection of one-act plays: Behind an Invisible Wall

children’s books: The Secret of a Blue Crystal, The Genie of Lake Manito, Musician with  Cylinder and a Flower on His Lapel, The Blue Mountain, Secret’s Secret

She has been a guest writer in residential programs in the US (NYC; Ledig House, NY), Hungary (Pécs), and Austria (Vienna). Also, she spent thirteen months in California and Washington D.C. as a Hubert H. Humphrey fellow. The Humphrey Program has been primary funded by the Congress through the Department of State. As an OeAD fellow she did an extend research at Karl-Franzens-Universität and Institut für Slawistik in Graz, Austria. Besides, she participated in Rhodes, Greece (1st International Forum for a Culture of Peace by Mediterranean Women Creators, under the auspice of UNESCO), Bologna, Italy, Bratislava, Slovakia, etc.

Her two novels, The Lost Seal (2009) and The Atellan Farce (2012), have been nominated for the Meša Selimović Award (Tuzla, B&H). Two of her stories, The Maiden’s Rock and The Fire in Alexandria, have been in the Department of Slavic Languages and Literature’s syllabus, University of California – Berkeley.

She was nominated ten times for the Astrid Lindgren Memorial Award (2008-2018), the world’s largest award for children’s literature founded by the Swedish government. Her book of fairy tales The Genie of Lake Manito was chosen for the 2011 White Ravens by the Internationale Jugendbibliothek in Munich. The White Raven award is given to children’s books of exceptional and innovative artistic and literary style. Her two children’s books, The Genie of Lake Manito (2011) and The Blue Mountain (2013), were nominated for the Little Prince Award (Tuzla, B&H).

Her illustrated book Secret’s Secret was selected for 23rd Biennial of Illustration /BIB/, Bratislava, Slovakia (2011), and for 12th International Biennial of Illustration Belgrade, Serbia (2011). Her fairy tale The Marvelous Star was awarded for the best play in SFR Yugoslavia (1990). Four of her fairy tales are set texts for elementary schools in Montenegro and Macedonia.

Her stories have been translated and published in many renowned international magazines – Buchkulur, Sarajevo Notebooks, Blesok, Ars, etc.